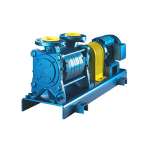 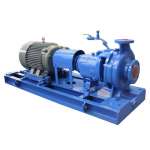 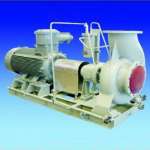 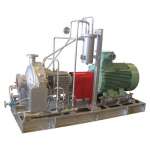 Klaus Union Gmbh & Co. KG (1)
Manufacturer   Germany   Worldwide
For more than 65 years we have been a market leader in the development of magnet drive pumps and valves that meet the most exacting... 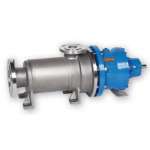 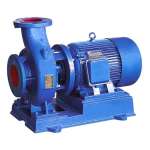 Liquid delivery with side channel pumps

The earth is surrounded by an air envelope which is subject to weather-related pressure fluctuations and has an average pressure of 1 bar (10 N/cm2) at sea level. All bodies on the earth's surface and thus also all liquids are exposed to this atmospheric pressure.

If this atmospheric pressure is reduced by a technical device, the resulting pressure difference is able to raise a column of liquid to a certain height. This height is indicated in m Fl.S (meter liquid column). In relation to water as a pumping medium with a density of 1000 kg/m3 this means that with a 100% vacuum (which is of course technically not feasible) the height of the water column would theoretically be 10 m.

Good self-priming side-channel pumps achieve a suction head of about 7 - 8 m, due to mechanical losses and leaks.

Pumps according to the positive displacement principle

A pump of this type consists of a casing containing a rotatably mounted impeller driven by an electric motor. However, the housing with the impeller must be filled with the medium to be pumped before the pump can be operated. This can be done by installing the pump geometrically lower than the liquid level of the medium to be pumped. Then the liquid would automatically fill the pump casing even before the pump is started.

If, due to other criteria, the pump has to be set higher than the liquid level, a one-time filling of the pump suction side with the medium to be pumped is necessary before starting up.

When the pump is running, the liquid medium is pressed against the wall of the pump housing by the resulting centrifugal forces and escapes through the pressure outlet of the pump.

A self-priming pump is capable of venting the suction line to a certain extent during operation without additional measures, thus starting the delivery of the liquid medium. Self-priming hydraulic pumps are for example piston pumps. Here too, however, the suction capacity is limited by the inevitable air gaps between the piston and the cylinder wall. Especially when a piston pump is not in operation for a longer period of time, it is therefore advisable to first fill the suction side of the pump with the medium to be pumped. The liquid then acts as a kind of seal between piston and cylinder wall. This considerably increases the suction capacity.

Special features of side channel pumps

In a flowing medium, its total energy is made up of velocity energy (kinetic energy), pressure energy, and position or altitude energy. The sum of these three partial energies is constant at any point in the flowing medium. Mathematically, this law of nature is summarized in the energy equation:

In this energy equation (also called Bernoulli's equation) the

When the speed of the flowing medium decreases, its pressure increases at the same time, also because of the constancy of the total energy.

Advantages of the side channel pump

Large conveying heights can be reached. Conveying is possible without any problems even under unfavourable conditions. The side channel pump is particularly suitable for light-boiling substances, such as liquid gas, which change their aggregate state from liquid to gaseous even at low pressure.
Side channel pumps are insensitive to the unpleasant phenomenon of cavitation.

The effect of the change in velocity of the flowing medium at the transition from the impeller to the side channel can be increased even further by connecting them in series. The arrangement of several impellers with downstream side channels improves the positive properties of side channel pumps.

Side channel pumps are suitable for large discharge heads due to the higher pressure in the side channels.

Side channel pumps are preferably used for pumping light boiling media such as liquid gases. Side channel pumps do not cause any problems when changing the aggregate state of these media from liquid to gaseous and vice versa.