maxon congratulates on the successful Mars landing of the Perseverance Rover 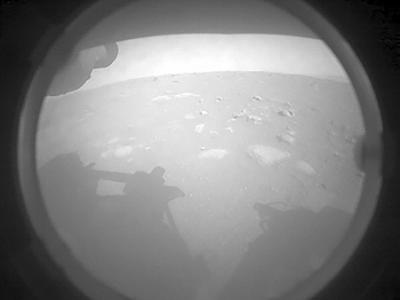 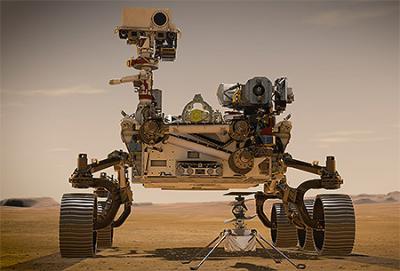 Great success for NASA's Jet Propulsion Laboratory (JPL): The rover Perseverance landed in the Jezero Crater on Mars on February 18. Several electric drives from maxon are used in the ambitious mission - among other things, when the helicopter brought along takes off for its first flight.

"We are incredibly relieved and happy about the successful landing," says Eugen Elmiger, CEO maxon Group. He and many employees involved in the Mars project followed the landing of the Mars2020 mission live in a virtual chat and cheered when the safe touchdown of the rover in the Jezero crater was confirmed. After all, ten BLDC motors and a special gearhead from maxon are used in the rover named Perseverance. Six brushed maxon DCX motors are in the small helicopter drone that is attached to the underside of the rover and will soon make its first ever flight on Mars. Eugen Elmiger says, "Many years of hard work have gone into these Mars drives. Our engineers, together with the specialists at JPL, have repeatedly improved the components and subjected them to all kinds of tests to ensure that they reliably do their job on Mars."

First step for the retrieval of Mars samples

One of the most important tasks of Perseverance is to collect up to 30 soil samples, fill them individually into containers, seal them and finally place them on the surface so that a later mission can collect the samples and bring them back to Earth. Among other things, JPL uses maxon's electric drives to move the robotic arm that navigates the soil samples inside the rover from station to station. In addition, maxon motors are used for sealing the containers and placing them, and the mechanism that sets the helicopter down is also moved by a maxon BLDC motor. Mars2020 is the start to a whole series of missions with the goal of bringing Mars samples back to Earth. maxon components will continue to play an important role.

The maxon Group, with global sales of CHF 568 million, is mainly active in medical technology and industrial automation. Space applications only constitute a small portion of maxon’s orders, but the high requirements push maxon to the next level. This is evident in the increased quality standards, as well as new testing methods and processes. And of course they exert a special fascination on the employees involved. Or as Kathrin Tschersich, Head of Assembly Project Samples at maxon, puts it: "It makes me very proud to know that products that have passed through my hands are being used on Mars."

Swiss precision motors handle the valuable Mars soil samples
The NASA rover Perseverance is landing on Mars on February 18. Was there life on Mars in the past? This is the question that one of the most complex robotic systems ever built by humankind has set out to answer. Several of maxon’s electric drives are used for handling the soil samples—and control the first Mars helicopter.

maxon introduces a multi-axis controller for highly dynamic positioning tasks
maxon is launching the next generation of Motion Controllers with its MiniMACS6-AMP-4/50/10. The controller is ideal for use in applications where PLC solutions may be too expensive or cannot meet customer-specific requirements.

«driven» takes a look at the fourth planet
Our fascination with Mars is stronger than ever, again and again, researchers are drawn to it. At this very moment, yet another robot mission is on its way to uncover the secrets of Mars. This mission will also involve the first helicopter flight in space. We’ve dedicated this issue of driven to the Perseverance mission and all of the other explorative missions before it.

maxon and ANYbotics enter into a strategic partnership
Drive specialist maxon, renowned for its Mars motors, is joining forces with the robotics startup ANYbotics and will in future supply the drive systems of the autonomous ANYmal inspection robot. The robot will soon be marketed in large quantities. This cooperation will also benefit maxon, since ANYbotics provides important robotics know-how and is currently the most successful young company in this field.