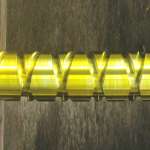 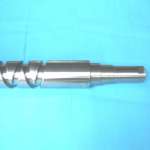 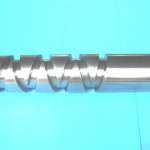 Burgsmüller GmbH (2)
Manufacturer   Germany   Worldwide
Founded in 1876, Burgsmüller's product portfolio today extends from wear parts for plastics processing machines up to complete machine tools. Within the frame of our...

Structure of a winch spooling shaft

Winch spooling shafts belong to the well-known rope spool technologies. As a highly developed mechanical method, they consist of a multi-layer rope spool on a rope drum. On the rope drum, they are guided in a precisely ordered geometry in multiple layers on top of each other.

The rope guide is produced by a specific groove on the shaft. These grooves are usually milled into the shaft and correspond to a crosswise course around the shaft, whereby one groove is turned to the left and the other to the right. The cross-thread spindle owes its name to this course of the grooves.

The milled grooves secure the position of the rope when it is wound onto the drum. The rope grooves run parallel to the outboard pulleys, the so-called parallel area. During spooling, the desired geometry is ensured at the transition from layer to layer with the aid of end fillers. Due to a pyramid-shaped rope construction in the parallel area, a constant and extremely stable spooling pattern can be achieved from start to finish.

The multi-layer rope spool system of the spindle is supplemented by a sprocket drive in the case of a cross-thread spindle. The chain wheel drives a shaft, over which the rope is guided from flange to flange via a sheave.

Use of mechanical technology

The principle of orderly rope drums has been used since 1937. Due to the particularly large power transmission, it is frequently used in the construction industry, in oil production plants or in mining.

The multi-layer rope spool principle is a proven technology, which has been transferred to more and more areas of application in the course of time through some innovations such as the cross thread. The cross-thread spindle is ideal for use in areas where steel cables in long lengths have to be wound quickly and as smoothly as possible.

Due to the winding into several layers lying on top of each other, it is also popular for cranes and conveyor systems in the construction industry, but also for ship loading.

Especially in the offshore industry, winch winders are used to wind the heavy and long cable harnesses onto a rope drum as effectively as possible. Thanks to the uniform guidance of the cable from flange to flange thanks to the cross-thread spindle, a synchronized spooling in several layers can be made possible.

The milled groove of the cross-thread spindle significantly reduces rope wear compared to other industrial spindles. The multi-layer spooling enables optimum load distribution to the individual layers and the mechanical guidance of the rope into the intended drum geometry prevents the rope from being cut or crushed, thus preventing excessive wear. This allows the rope to last three to five times longer than other conventional spindles.

The multi-layer system also enables the spooling of particularly long rope lengths with relatively small drums. The multi-layer spooling makes it possible to spool the rope to a smaller diameter of the drum to save space. This is particularly practical in applications where the available space must be used as effectively as possible and a reduction in the size of the rope drum can save costs. In addition to saving space with the smaller rope drum, a considerable amount of material can also be saved and material costs reduced. Also, due to the smaller amount of material, weight is usually saved, which can be necessary for the many different applications and is interesting for new applications.