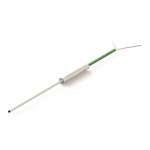 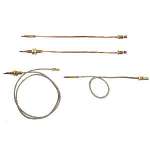 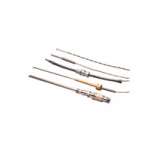 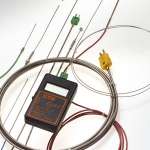 SAB Bröckskes GmbH & Co. KG (1)
Manufacturer   Germany   Worldwide
More than 60 years of experience in temperature measurement and control technique as well as in cable production have made a one man business a... 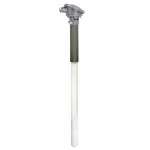 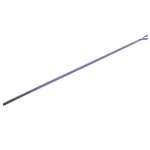 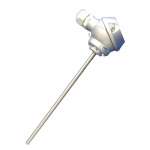 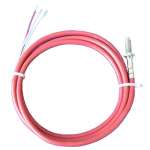 With thermocouples, different metals are joined together at a certain distance, usually by soldering joints. One connection point represents a measuring point, the other serves as a reference point. If different temperatures prevail at these two connection points, an electric thermoelectric voltage is generated between these contact points, which allows a small but measurable current to flow. This phenomenon is also known as the Seebeck effect.

Cause of the thermoelectric emf

Physical details on the magnitude of the thermoelectric emf

The size of the Seebeck coefficient is given for different metals in relation to platinum (Pt). The base temperature is T = 273 K (0 °C).

However, the physical relationship between temperature and thermoelectric voltage is not linear, but approximates the shape of a parabola.

The coefficients a and b here are thermoelectric material constants. The temperature difference is indicated here with T, at a reference temperature of T0 = 273 K (0 °C).

Types and applications of thermocouples

Manufacturers of thermocouples differentiate between types K, N, J, E, T, R, S and B. These types are intended for different application and temperature ranges and are sorted according to the following definition:

Heating conductors and heating elements must operate in the correct temperature range in practical applications. Thermocouples often serve here as monitoring and control elements and are successfully used for such purposes.