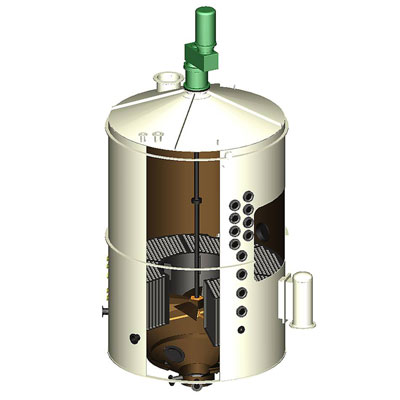 Buckau-Wolf vacuum pans are used in the sugar crystallization process. They are featured with special patented honeycomb calandrias. These calandrias consist of tubes in honeycomb-design without any tube plate. Due to this design, the distance between the tubes decreases and the heating surface ratio is optimized compared to the traditional designs.
In comparison with the traditional design of the tubular heating chambers, the honeycomb calandrias provide approximately 25% more heating surface with the same space requirements and reduce the deposition areas on the upper side of the chamber by about 75 %.
A circulation tube and the agitator provide an optimal mixing and a directed stream and ensure a homogenous suspension and an intensive heat exchange. It results in a better crystal structure and a shorter process time.
The resultant customer benefits

The most important advantage of the honeycomb calandrias is that they are easy to install into existing systems, especially in systems with ribbon, lenticular or tubular calandrias. The length of tube and the heating surface is redefined and customized.
The BWS retrofitting has proved itself successfully in more than 200 vacuum pans. Six segments are put together for a new honeycomb calandria system and have been installed in more than 120 cooking devices of other manufacturers since the foundation of BWS.
Simply retrofit economic efficiency
Contact us

BWS Technologie GmbH is the leading expert for industrial mixing and separation processes in numerous industries and application ranges. With experience, ideas and first-class expertise, we offer our customers around the world customised solutions and a superior level of service they can count on. Our tradition goes back over 170 years. In 1998, our two product brands, Buckau-Wolf (Sugar Technology) and Supraton® (Inline mixing technology) were combined under BWS Technologie GmbH.